The Life of Saint Clare of Assisi 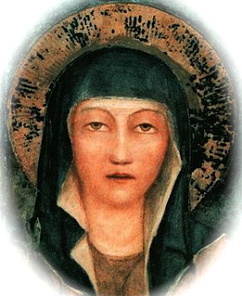 Clare was born in 1193 in Assisi, a small town in the scenic Umbrian Valley of Italy. She was born of nobility, the oldest child of Ortulana and Favarone di Offreduccio. At the end of the 12th and the beginning of the 13th century, Italy was a cauldron of political and military strife. Society was divided into two groups: the maiores and minores. The maiores were the nobility. The minores were former serfs, who had become merchants, craftsmen and field workers. These two groups were continually fighting for power among themselves.

In her early youth, Clare was exiled to Perugia. While the men in the family were off fighting their wars, the women chose to live as penitents. Ortulana, along with her daughters, as well as other women among Clare’s family and friends, were fasting, praying, bringing food to the poor and visiting prisoners. This time of suffering and exile became a time of spiritual formation. Many of the women living with Clare in Perugia, including her mother and sisters, later became some of Clare’s first followers in San Damiano.

In 1205, Clare’s family returned to Assisi. Francis had already begun his conversion. He had publicly renounced his father and started rebuilding San Damiano. In 1208, he began preaching. Clare’s cousin Rufino became one of his early followers. Clare’s household had to have experienced the stir that Francis was causing. An eyewitness, cited in the Acts of the Process of Canonization [of Clare], said that, during this time, Clare went to hear Francis preach, gave him some money to rebuild churches and to feed the poor, and arranged to talk to him in private.

Clare and Francis were both experiencing God breaking into their lives, changing them and calling them to give themselves over to God. Both were facing unknowns and both were probably frightened and unsure of themselves. It must have been a comforting grace to meet a kindred spirit and to encounter another human being who was experiencing the same call and facing the same doubts. Clare’s sister Beatrice tells us (in the document of the canonization process) that Francis first initiated the visit with Clare. Some speculation suggests that women were asking to join his movement and Francis needed a strong woman to lead the others.

Clare’s reputation for holiness was well known in Assisi. She would be the perfect leader. Who went to whom first is unimportant. The important reality was that God had a plan and that Francis and Clare were open to being led. Francis and the brothers received Clare on Palm Sunday night at the chapel of St. Mary of the Angels (the Portiuncula) in the year 1212. Shortly after this, she was taken to San Paolo, a Benedictine monastery in Bastia. The men in Clare’s family were not happy with her following Francis. Their power and wealth were diminishing with the changes in society. Clare was beautiful and they had hoped that her marriage would bring prestige and continued wealth into the family. They followed her to San Paolo with every intention of bringing her home. Clare instead held on to the altar and claimed sanctuary. She had made her choice. She would never turn back. Clare’s sister Catherine, soon to be called Agnes, joined Clare. The two lived for a while with a group of Beguines (13th-century women under vows) in Sant’Angelo in Panzo until Francis brought them to the church of San Damiano. There, the Lord gave them sisters and their community grew quickly.

Clare’s community was to be vastly different from the monastic communities of her time. The sisters were to live poorly without large land holdings. Like Francis, their Rule would be to embrace the gospel form of life. They would all be of equal rank, and all decisions affecting their life would be made by all of them. They would have an abbess, but she would consider herself “the servant of the sisters” and she would lead more by her example of virtue than by instruction or admonition. Clare was the perfect follower of Francis. She understood his message and would spend her entire life making it a lived reality. Her life and the lives of the early sisters, however, were not easy ones.

Francis died young. Clare outlived him by 27 years. She remained firm and kept the ideal alive, despite Francis’ absence and the dissension among his brothers. The Church would see the poverty of her life as too difficult. She negotiated with popes and worked to get her Rule approved until the day before she died—August 10, 1253. Within the context of the medieval world of the 13th century, Clare lived and struggled with many of the issues that are present in our day. She was a woman of strength and courage, of wisdom and insight, of patience and with an innate gift of leadership. Looking closely at her, we can learn much about the response to life that enables us to be free in a world where oppression abounds. As a medieval woman born into a rich and powerful family, her role in life was defined for her when she was still a child by the men who ruled the clan. She would be married to a man of their choosing, someone whose assets and social standing would make the clan even more powerful. Her wishes were considered irrelevant, until the day she sold her inheritance, instantly making her worthless in the marriage market.

Clare’s society was rigidly stratified. She broke down those class structures by insisting that everyone work with their hands and that everyone was equal in every way. Without hesitation, she swept away all the artificial class distinctions that society had created and which led to wars and violence. Clare has much to teach us about living together on our planet earth as sisters and brothers, all children of the one God.

Clare understood the links between money and power. Economic freedom equals social freedom which in this context paves the way for spiritual freedom. Clare’s life of absolute poverty cuts through all the enticements of our consumerist culture. Clare exhorted her sisters who served outside the monastery to: Praise God for every green and flowering plant that you see; for every human person and for every creature. The environmental crisis is the result of a lack of care and reverence for the good things that God has given us for our use and our happiness. In beholding a flower, a sunset, the vast ocean, the varieties of animals, the sun, moon, stars, human beings so often fail to see, as Clare did, the reflection of a loving Creator of all these wonders.

Her wisdom and holiness were recognized far and wide, and Popes and prelates came to her to recommend themselves to her prayer. In our contemporary world, women all over the globe are experiencing their worth and dignity in a new way and are struggling to resist the forces of oppression and domination which perpetuate the evil of unhealthy dependence. In this struggle Clare has much to teach all of us.

Clare is as relevant today as she was in the thirteenth century. Perhaps even more so because like all holy people, she was a prophet whose message is timeless.