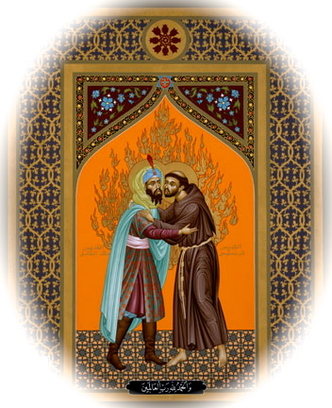 Six years before his death, Francis goes to the Egypt to meet the Sultan, the leader of the enemies of the Cross of Christ. We might say he goes to meet enemy number one. Francis goes to live out the command of Jesus that we are to love our enemies, to pray for those who persecute us. In Francis own writing he recalls that Jesus called his betrayer, Judas – a friend. And that Jesus prayed for those who put him to death, asking the Father to forgive them. If Jesus did this then so must he. So Francis goes to Egypt to meet his enemy, to make his enemy his friend. Amazingly he does just that.

Francis went to Egypt where the forces of Christendom faced the forces of the Muslems at the port city of Damiatta. Much more information related to book of ra classic gratis. After asking the Christian commander to stop the fighting, which the commander refused to do, Francis and a companiom, Brother Illuminatus, set out, unarmed to see the Sultan of Egypt, Malik-al-Kamil. The men of the Sultan’s army captured Francis and his companion and dragged them, beaten and exhausted, before the Sultan.

St. Bonaventure, in his Major Life of St. Francis, described the event, “The Sultan asked them by whom and why and in what capacity they had been sent, and how they got there; but Francis replied that they had been sent by God, not by men, to show him and his subjects the way of salvation and proclaim the truth of the Gospel message. When the sultan saw his enthusiasm and courage, he listened to him willingly and pressed him to stay with him.”

In the encounter between them, both Francis and the Sultan were changed. When Francis finally left to return to Italy, the Sultan showered him with many gifts and treasures. Because he had no interest in worldly wealth, Francis refused them all, except one special gift: an ivory horn used by the muezzin to call the faithful to prayer. On his return, Francis used it to call people for prayer or for preaching.