Lets first look at the Incarnation. St Francis is responsible for the popularity of Christmas Midnight Mass and Nativities scenes in Churches and homes. St Francis of Assisi was so taken by the mystery of the Incarnation that he wanted to present it anew in a living Nativity scene, He is perhaps the first to have a live nativity scene with animals and people playing the part of Mary, Joseph, the shepherds and wise men. This happened near the town of Greccio three years before his death. St. Bonaventure in his Life of St. Francis of Assisi tells the story the best:

“He wanted to commemorate the nativity of the Infant Jesus with great devotion, he prepared a manger, and brought hay, and an ox and an ass to the place appointed. The brethren were summoned, the people ran together, the forest resounded with their voices, and that venerable night was made glorious by many and brilliant lights and sonorous psalms of praise. The man of God [St. Francis] stood before the manger, full of devotion and piety, bathed in tears and radiant with joy; the Holy Gospel was chanted by Francis. Then he preached to the people about the nativity of the poor and humble King; and being unable to utter His name for the tenderness of His love, He called Him the Babe of Bethlehem. A certain valiant soldier, Master John of Greccio, affirmed that he beheld an Infant marvellously beautiful, sleeping in the manger, whom the blessed Father Francis embraced with both his arms, as if he would awake Him from sleep. This vision of the devout soldier is credible”.

a humble stable. Even today nativities scenes and pageants still touch the hearts of all who see them Picture The Paschal Mystery. We adore You, O Christ and we praise you, because by your cross You have redeemed the world.” Most of us will recognize this pray as part of the Stations of the Cross. It actual is a shorten form of a prayer by St. Francis. We find it in his Testament. “The Lord gave me such faith in churches that I would simply pray and speak in this way: we adore You, Lord Jesus Christ, in all Your Churches throughout the world, and we bless You, for through Your holy Cross You have redeemed the world.” When Francis meditated on the Cross: “His whole soul seemed to melt away; and so deeply was the memory of Christ’s Passion impressed on his heart, that it pierced even to the marrow of his bones. From that hour, whenever he thought of the Passion of Christ he could scarcely restrain his tears and sighs.” Celano relates, “From that hour he was pierced with compassion for the Crucified Saviour, so that for the rest of his life he bore in his heart the holy wounds, which later were also impressed upon his body. The sufferings of Christ were ever before his eyes, and filled them with ever-flowing tears.” 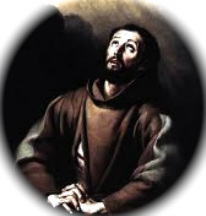 Two years before his death after a retreat of many weeks meditating on the love of Christ in the Passion Francis was mark with the sacred wounds of Christ the stigmata. If you like, you can go your own beginners luck within slot spiele kostenlos ohne anmeldung book of ra. Christ appeared to him as a six wing saraph. Francis through his daily meditations on the cross was able to live out the words of St. Paul “ May I never boast except in the cross of our Lord Jesus Christ” (Gal 6,14). Franciscan spirituality encourages us to do the same.

Eucharist is amazing how often Francis mentioned the Eucharist in his letters. Whether he was writing to Rulers, the Friars or the brothers and sisters of penance he encouraged all to receive the Eucharist. In the Rule of 1221 Francis tells the friars: “let them receive the body and blood of our Lord Jesus Christ with great humility and veneration, calling to mind what the Lord Himself says: ‘He that eats my flesh and drinks my blood has everlasting life and do this in memory of me.”

Near the end of his life, when he was unable to attend the General Chapter he sent these words to the friars. “I conjure you all, brothers, kissing your feet and with the charity of which I am capable, to show all reverence and honour possible to the most holy body and blood of our Lord Jesus Christ, in whom the things that are in heaven and the things that are on earth are pacified and reconciled to almighty God”. St Francis in his own time encouraged people to have a greater devotion and understanding of the Eucharist in these short few words. “Every fiber of the heart of Francis was aglow with love for the sacrament of the Body and Blood of Christ. He considered it an unpardonable negligence not to attend Mass each day whenever possible. If he could not make it to Mass due to illness he would have the Gospel of the day read to him. If I can not be present at Mass, I adore the Body of Christ in adoration and with the eyes of the soul”.

I think each of us can understand the humility of God both in the Incarnation in the Passion. “And being found in human form, he humbled himself and became obedient to the point of death – even death on the cross” (Phil 2:8). What is most interesting is that Francis adds the Eucharist to his mediations on the humility of God. Francis was profoundly struck by the humility of Jesus who, for love of humanity, deigned to be with us under the appearance of bread and wine. He wrote in the 1st Admonition: “Behold, each day He humbles Himself as when he came from the royal throne into the Virgin’s womb; each day He Himself comes to us, appearing humbly; each day He comes down from the bosom of the Father upon the altar in the hands of a priest. As He revealed Himself to the holy apostles in true flesh, so He reveals Himself to us now in sacred bread. And as they saw only His flesh by an insight of their flesh, yet believed that He was God as they contemplated Him with their spiritual eyes, let us, as we see bread and wine with our bodily eyes, see and firmly believe that they are His most holy Body and Blood living and true.

“Let the whole of mankind tremble, the whole world shake and the heavens exult when Christ, the Son of the living God, is [present] on the altar in the hands of a priest. O admirable heights and sublime lowliness! O sublime humility! O humble sublimity! That the Lord of the universe, God and the Son of God, so humbles Himself that for our salvation He hides Himself under the little form of Bread! Look, brothers, at the humility of God and pour out your heart before Him! Humble yourselves, as well, that you may be exalted by Him. Therefore hold back nothing of yourselves for yourselves so that He who gives Himself totally to you may receive you totally”.

Francis wanted to die at the Portiuncula, the little church of St Mary of the Angel, the little portion of heaven. He wanted to give up the breath of life where he had first experienced the breath of Grace. As he lay dying he asked that the Gospel of John chapter 13 be read. We hear this Gospel every Holy Thursday. It is about Jesus washing the feet of his disciples.

Do you know what I have done to you? You call me Teacher and Lord—and you are right, for that is what I am. So if I, your Lord and Teacher, have washed your feet, you also ought to wash one another’s feet. For I have set you an example that you also should do as I have done to you”. (John 13:12-15)

As he was dying he told the friars who were present: “I have done my part, may Christ teach you to do yours”.

“The Exhortation of our Blessed Father Francis”

O most beloved Friars and Sons forever blessed, hear me; hear the voice of your father. Great things we have promised; Greater have been promised us. Let us observe the former: Let us aspire to the latter. Pleasure is slight; glory, infinite. Many are called; few are chosen; retribution for all. Brethren, while we have time, let us do good.